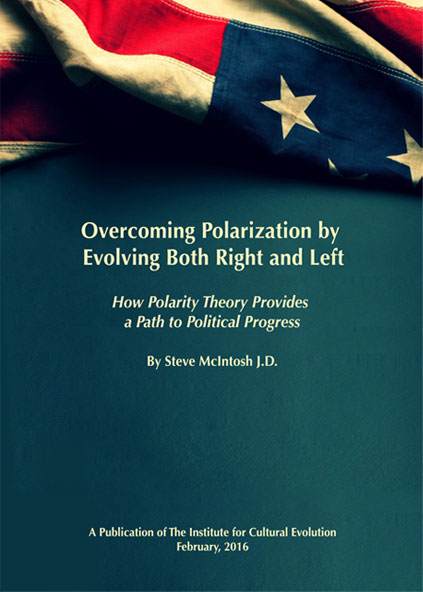 ICE Whitepaper: Overcoming Polarization by Evolving Both Right and Left

How Polarity Theory Provides a Path to Political Progress

Hyper-partisan polarization is crippling our democracy, preventing meaningful action on a wide range of urgent issues. And now polarization even threatens the functionality of the Supreme Court. It can, however, be difficult to focus on a problem that has no apparent solution. Yet while hyper-partisanship is indeed a ‘wicked problem’ with many causes and no straightforward fix, ICE’s integral perspective illuminates a new strategy that can realistically overcome our nation’s political dysfunction.

As Steve argues in this paper, Overcoming Polarization by Evolving Right and Left, we can effectively grow out of extreme polarization by sharpening our focus on the foundational values that form the bedrock of loyalty-identity underlying our national political landscape. Building on the analysis of my acclaimed 2014 paper, Depolarizing the American Mind, this new paper describes a strategy to develop both the right and the left independently and according to their own distinct goals and values, as a prerequisite to greater cooperation overall.

In furtherance of this strategy of developing each side independently, the paper describes a new kind of deliberative polar alliance that can better integrate the competing camps (opposing poles) that exist within both the right and the left. It then shows how the American right can evolve by forming such a deliberative alliance between its conservative and libertarian poles. This is followed by a similar analysis of the American left, where an opportunity now exists to evolve this side of the spectrum by forming a more functional alliance between the liberal and progressive poles of the left. Eventually, as both sides evolve culturally, the inherent virtue of each side’s bedrock values will become more apparent, leading to greater sympathy and trust. It is thus through this kind of cultural evolution that we can effectively overcome our current political stagnation.

This article was originally published on The Institute for Cultural Evolution’s website on February 15, 2016