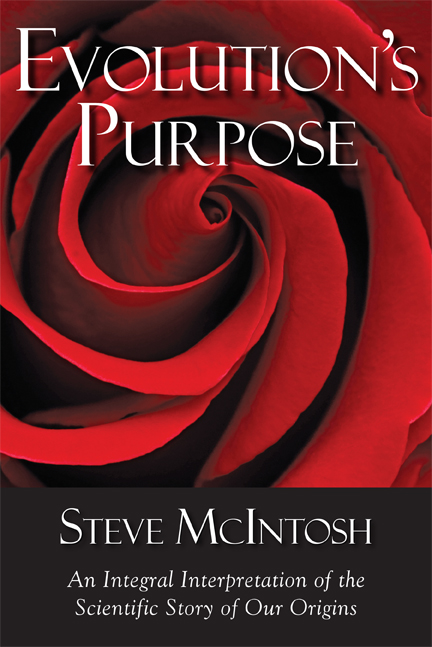 An Integral Interpretation of the Scientific Story of Our Origins

The evolutionary story of our origins has tremendous cultural power that transcends the boundaries of science; it shapes the view of who we are and why we are here. Yet many of the scientific luminaries responsible for educating the public about evolution tell us that it is an essentially random or accidental process with no larger meaning. However, as the scientific facts of evolution have increasingly come to light, these very facts demonstrate that the process of evolution is unmistakably progressive. And as we come to clearly see how evolution progresses, this reveals evolution’s purpose—to grow toward ever-widening realizations of beauty, truth, and goodness.

McIntosh argues that the purpose of evolution is not pre-planned, “intelligently designed” or otherwise externally controlled; rather, its purpose is being creatively and originally discerned through the choices of evolutionary creatures themselves. This is especially evident in the case of human cultural evolution, which moves persistently toward directions of intrinsic value, despite frequent setbacks and ongoing problems.

In response to the exhaustion of materialism, Evolution’s Purpose provides an updated philosophy of evolution that better accounts for what science has now revealed. Without relying on any spiritual authorities, McIntosh demonstrates evolution’s purposeful progression and shows how the scientific story of our origins is actually a profound and sacred teaching compatible with many forms of contemporary spirituality. If we want to discover evolution’s purpose, we need only look within ourselves. Our purposes are its purposes.

“McIntosh is persuasive in his arguments that the scientific facts of evolution cannot stand alone … science shows that historical evolution, whatever its contingencies, is itself on a trajectory of values development. McIntosh has well-researched his sources and integrated them with seminal insight.”

— Holmes Rolston III, winner of the 2003 Templeton prize, and author of Environmental Ethics

“Steve McIntosh’s insightful new book is as readable a “guide for the perplexed” as one can expect to find amidst the many conflicting messages in contemporary thought and culture.  Mining the wisdom of traditional philosophies and religions, yet fully conversant with contemporary evolutionary science, McIntosh’s fresh synthesis will be helpful to all sincere inquirers.”

“It’s so easy to feel overwhelmed by the dramatic turn of world events. Evolution’s Purpose presents another view of the chaos … that humanity is evolving in an ultimately purposeful way, lending both meaning and illumination to our individual and collective struggles. Steve McIntosh’s brilliant ideas are both stimulating and comforting, as he lays out a theory of our evolution that is both scientifically and spiritually profound.”

— Marianne Williamson, author of A Return to Love

“Many folks are writing about evolution these days, but few with the vision, intelligence, and even brilliance that Steve McIntosh brings to the table. Thank you Steve! You are our 21st century Henri Bergson.”

— Allan Combs, Ph.D., Professor of Philosophy, California Institute of Integral Studies, author of The Radiance of Being and coauthor of Dreamer of the Earth.

“Evolution’s Purpose reaches deep into the living essence of evolution within the cosmos and within ourselves. It gives us strong arguments to carry us beyond the limitations of the neo-Darwinian assertion of no purpose, meaning or direction in evolution; and also beyond the post-modern sense of relativism, by offering a far deeper exploration of the source of purpose itself intrinsic to evolutionary direction. It calls us to become “part of the universal family of conscious evolutionaries who have embarked on the magnificent adventure of experiential perfection.”  Most important, this seminal book places the “Evolutionary World View” on the “memetic map” of global culture to guide our generation in the direction of our evolutionary transformation. This is a very important work.”

— Barbara Marx Hubbard, Futurist, and founder of The Foundation for Conscious Evolution

“A truly excellent, clear and convincing contribution to our understanding of where evolution is taking us, and in that context, what the deeper meaning may be of the Worldshift we are now facing. Should be read by everyone who is willing to wake up and take a responsible role in shaping our common destiny.”

— Dr. Ervin Laszlo, Distinguished system scientist, President of the Club of Budapest, and author of over 30 books on evolution.

“Evolution’s Purpose is a masterpiece! With both uninhibited passion and fierce intellect, philosopher Steve McIntosh deconstructs the materialist paradigm with the precision of an expert neurosurgeon. With gentle persistence and irrefutable logic, he reveals many of the false assumptions in scientific, cultural, and spiritual orientations about our presence in the universe that are less than integral. He takes us on a fascinating journey through the history and evolution of our own conscious and unconscious beliefs, finally delivering us with a truth that is impossible to deny or avoid: We are part of a process that has a direction and through awakening to this life-affirming truth, we discover a sense of purpose that changes everything.”

— Andrew Cohen, author of Evolutionary Enlightenment, and founder of EnlightenNext

“In an intellectual environment where the mindset of Richard Dawkins and Daniel Dennett dominate all discourse when it comes to evolution, Steve McIntosh give us a scientifically literate, philosophically rich, and spiritually potent alternative. His evolutionary vision is a brilliant light of clear thinking in a landscape dimmed by reactionary atheism and dogmatic materialism. Addressing evolution as a powerful context for meaning and purpose, McIntosh expertly shows us how a new and broader understanding of evolution can revolutionize the way we understand not just physical development but social and cultural progress as well. Deeply considered and tightly argued, Evolution’s Purpose presents a powerful message of hope to the modern world, one that renews our love for spirit and restores our faith in the future.”

“Composed in the spirit of Brian Swimme’s new universe story, but deeply informed by integral theory, Evolution’s Purpose explores the spiritual influences on evolution that are nevertheless consistent with the major tenets of contemporary science.  With his clear and accessible prose, Steve McIntosh shares with readers not only his theoretical reflections on the evolutionary emergence of beauty, truth, and goodness, but also how our personal experience confirms the presence of these enormously important ingredients of an evolving cosmos.  I highly recommend this book for anyone seeking to make sense of the evolution of cosmos and consciousness.”

— Michael E. Zimmerman, Professor of Philosophy, University of Colorado at Boulder, and co-author of Integral Ecology

“Evolution’s Purpose is a breakthrough book. It redefines the terms of the rational public debate over evolution. In it, Steve McIntosh articulates, in his lucid original voice, important new ideas and persuasive arguments that clarify a hard-headed rationale for the spiritual implications of our scientific understanding of the story of evolution.”

“Evolution’s Purpose hits me in a sweet spot, where my scientific mind is transcended— and included—into larger, richer and more sacred dimensions.  I feel changed and liberated after reading this book the way I did after finishing The Road Less Traveled and Up from Eden: more awake, heartened, grateful for this gift of existence, and motivated to align my life with the power of loving intelligence that is living in me.”