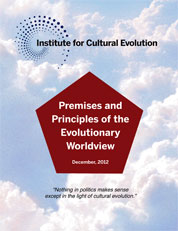 This article, published by The Institute for Cultural Evolution, provides an overview of the integral perspective that animates the work of the ICE think tank. The text is adapted from the final chapter of Steve’s 2012 book Evolution’s Purpose. As described in the article, the evolutionary worldview has itself evolved over the last century through the work of integral philosophers Henri Bergson, Alfred North Whitehead, Pierre Teilhard de Chardin, Ken Wilber, Jean Gebser, Clare Graves, and others. Although these founders of integral philosophy differ on many points, they have all recognized that a deeper understanding of the human condition shows how, in at least some places, human nature itself has developed, values and worldviews have evolved, concepts of “worldcentric” morality have come to replace more narrow ethnocentric sensibilities, democracies have replaced tyrannies, economic engagement has replaced military competition, science and technology have flourished in place of myth and superstition, and merit-based organizations have replaced those based on race, class and caste. As a result of this ongoing evolution of culture, some segments of the world’s population have increasingly come to reject war, to condemn oppression, embrace diversity, and to place a high value on the preservation of the natural environment. Understanding how these evolving values have cohered historically to form worldviews, and appreciating how those worldviews inform human society today is the focus of this article.