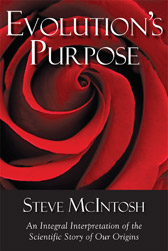 Media and Endorsements for Evolution’s Purpose

Utne Reader published an excerpt from the introduction chapter of the book in November 2012. Utne highlighted how “A better understanding of the purpose of evolution will lead directly to a more evolved world.”
Read more…

Metanexus Institute, the science and religion foundation, featured a blog post on the book.
Read more…

Home Brewed Christianity, the popular progressive Christian website, published a blog on the book and featured a podcast interview of Steve.
Read more…

Below are the names of luminaries who have endorsed the book. (click on a name to read their endorsement):