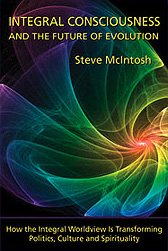 Media and Endorsements for Integral Consciousness

Review of Integral Consciousness and the Future of Evolutionby Peter Laurence in the February 2009 issue of The Journal of College & Character, Volume X, No. 3, Walden University
Read full article…

Feature Article by Steve: Integral Politics and the Evolution of Consciousness and Culture, in the July/August 2008 issue of Tikkun Magazine
Read full article…

Interview of Steve entitled: Integral Politics Comes of Age, in the December 2007 issue of What Is Enlightenment? Magazine
Read full article…

[raw] Review of Integral Consciousness and the Future of Evolutionin the February 2008 issue of Shift, the Magazine of the Institute of Noetic Sciences
[toggle last title=”Read review…”][quote byline=”Byron Belitsos”]“Until now, the integral movement has all too often consisted of a series of footnotes to a single “master,” Ken Wilber. In this widely hailed book—called “ingenious…an alchemical vessel” by Jean Houston and “a signal contribution” by Ervin Laszlo—lay philosopher Steve McIntosh serves up “integralism for the rest of us.” Integral Consciousness is really two books in one: the first half serves as an accessible introduction to “the power of integral consciousness,” defining integralism in a way that Don Beck (of Spiral Dynamics fame) calls “refreshing, indeed.” The second half makes strikingly original contributions to integral theory, breaking new ground in its application to global governance and spirituality in a series of chapters that I found especially riveting. McIntosh not only challenges the idiosyncratic picture of integralism provided by Wilber, but goes on to prove that integral consciousness provides realistic and even inspirational solutions to today’s greatest challenges.”[/quote][/toggle] [/raw]

Praise for Integral Consciousness and the Future of Evolutionby the following luminaries (click on a name to read their blurb):