The three page preface recounts the story of the book’s genesis and the author’s political experience. The preface also explains the overall purpose of the book, which is to help American culture evolve beyond its hyperpolarized condition.

PART I: TOWARD A POLITICS OF CULTURE

Chapter 1 argues that the problem of America’s bitterly divided electorate is a pre-political cultural problem that is arising upstream from Washington politics. Over the last fifty years, American culture has been undergoing an unprecedented transition from one moral framework to another. During this period, traditional forms of morality have lost much of their authority, and a significant number of Americans have come to embrace progressive values. But even though America has largely outgrown its traditional moral system, the apparent alternative of the progressive moral system is not yet mature enough to serve as a replacement.

The chapter explains that because America’s cultural problem has been caused by its own evolution, gaining a more robust and sophisticated understanding of the evolution of culture itself provides the key to ameliorating hyperpolarization. And among all the distinct ways that the development of culture can be analyzed or described, the most promising approach involves interpreting cultural evolution through the concept of worldviews. This brief first chapter defines the concept of a worldview, and introduces the three major American worldviews, which the author labels: traditional, modernist, and postmodern.

Chapter 2 The Momentous Emergence of the Modernist Worldview

Chapter 2 then justifies the proposition that traditionalism, modernism, and postmodernism constitute American culture’s three major worldviews by describing how these three cultures came about. Going beyond the standard narrative of modernity’s emergence, chapter 2 explains how the advent of modernism was primarily the result of new liberal values. These liberal modernist values, however, ultimately rely on the borrowed “moral capital” of the previous worldview of traditionalism.

Chapter 2 then introduces the progressive postmodern worldview and explains why it is a historically significant worldview in its own right—a politically significant form of culture that can be compared and contrasted with both modernism and traditionalism. Chapter 2 explains how these three major worldviews form a dialectical system of cultural development. The chapter concludes by carefully justifying Developmental Politics’ concept of cultural evolution, distinguishing it from earlier Euro-centric notions of cultural superiority.

Chapter 3 Tracing the Development of the Progressive Postmodern Worldview

Chapter 3 focuses specifically on the genesis and character of the progressive postmodern worldview, which is the least understood of America’s three major worldviews. The chapter defines postmodernism broadly as progressive culture in general, and traces its origin in the nineteenth century. The chapter’s narrative of postmodernism’s emergence then describes this worldview’s initial cultural florescence in the 1960s, its second wave in the 1990s, as well as its contemporary status. Unlike other authors who either identify with postmodernism uncritically, or see it as a dire threat, McIntosh describes how this progressive form of culture is both a blessing and a curse for Western civilization—both a needed new level of ethical care and a reckless repudiation of the best of what has come before.

Chapter 4 explains how the conflict among America’s three major worldviews can be partially reconciled, and how these divergent worldviews can be brought together within a more cooperative political relationship. This needed truce in the culture war can be achieved through the innovative new method of values integration, which is Developmental Politics’ primary strategy for building political agreement.

First, chapter 4 considers why conventional methods for reaching consensus are not working. Then it focuses on the actual locus of America’s national political discord: The conflict between bedrock values where the cultural battle is joined. The work of integrating values accordingly entails analyzing both the positive and negative features of America’s major value systems, as well as charting the fault lines and dynamic tensions that exist between each of these political positions. After covering the basic outlines of the values integration method, the chapter then considers examples of the method in action to see how this approach is already working in the case of some issues, and how it can be expanded and pursued more deliberately with other political issues. Chapter 4 concludes with a discussion of the integrative perspective of “integral consciousness” that is ultimately needed to effectively build agreement by integrating values.

PART II: TOWARD A NEW POLITICAL PHILOSOPHY OF PURPOSE AND PROGRESS

Chapter 5 Evolving Our Understanding of the Good

Beginning Part II, chapter 5 introduces the evolutionary philosophy of Developmental Politics and the “new truth” it is based on. Chapter 5 then explains why a new political philosophy is needed to rehabilitate America’s collective commitment to political cooperation and ongoing social progress. Philosophy is necessary because supposedly value-neutral social science cannot establish a normative dimension of growth or otherwise clarify the direction of the good. Like the subject of ethics, the subject of progress in value is inescapably philosophical. And while questions such as what is the good? or what is progress? may at first seem overly abstract or academic, these age-old philosophical inquiries have a new relevance for our time.

Chapter 5 then introduces the idea that the behavior of values in the political process can be most accurately understood through an analogy with the properties of physical energy. As chapter 5 explains, values are the energizing source of both individual motivation and collective political will. The chapter concludes by arguing that a deeper understanding of the energetic properties of value provides a path to America’s political renewal.

Chapter 6 unpacks the notion that value can be understood as a form of “interior motivational energy.” The chapter describes how value itself enters the record of natural history with the emergence of life. Chapter 6 then goes on to explain how the emergence of humanity creates a new domain of evolution, which moves toward an ever-expanding dimension of values. The chapter then analyzes how the energetic pull of values attracts the perceived needs of both self-interest and greater-than-self-interest—interests which are ultimately interdependent. Chapter 6 concludes by discussing the political significance of ideals of transcendence. Building on the philosophical work of Charles Taylor, McIntosh argues that America needs a new vision of a higher purpose, one that can connect with authentic transcendence while still being acceptable to mainstream modernist sensibilities.

Chapter 7 begins by explaining how the concept of “transcendence” can serve as an umbrella term that is potentially agreeable to a wide spectrum of metaphysical commitments. As defined in chapter 7, the notion of transcendence does not require readers to either embrace the supernatural, or reject it out of hand. McIntosh naturalizes the idea of transcendence by showing how evolution itself has been literally moving in the direction of transcendence since the beginning. Evolution’s movement toward transcendence can be seen in the way “something more keeps coming from something less.”

The chapter goes on to ground the idea of transcendence in the intrinsic values of goodness, truth, and beauty. As McIntosh explains, these three most intrinsic values well-define what “further evolution” means at an existential level. Chapter 7 then discusses the promising potential of a “new American Dream”—a fresh and inclusive proposition for a national higher purpose that entails cultivating cultural evolution on every front of its development. This new ideal of America’s higher purpose carries forward the best aspects of previous versions of the American Dream, while also offering a new layer of transcendent meaning that is found in the intersection of science and spirituality.

Chapter Eight: A Renaissance of Virtue

Chapter 8 then shifts gears by arguing that in addition to fostering the evolution of culture, the work of building a better society also involves improving the “civic virtue” of a significant number of American citizens. Chapter 8 explains how the project of improving America’s overall collective virtue can be effectively forwarded through a popularization of the individual practice of fundamental virtues, or virtuous character strengths. The chapter describes how the personal practice of virtues has grown beyond its ancient religious origins and is now gaining ground in popular American culture. McIntosh discusses the exciting potential of the practice of “the virtues,” and why this practice lends itself to a comparison with the increasingly popular practice of mindfulness.

Building on the extensive literature on the virtues found in contemporary moral philosophy, in positive psychology, and in ancient religious traditions, chapter 8 applies the insights of integral philosophy to help naturalize and systematize the practice of virtues. After arguing for a system of “seven fundamental virtues,” the chapter explains how the practice of these specific virtues can help connect practitioners with the motivational energy that attracts both self-interest and greater-than-self-interest.

Chapter 8 concludes by explaining how the practice of the virtues is more than just a self-help technique. This practice has the exciting potential to become a unifying political force in American society. Values may differ widely, and even be dialectically opposed, but virtues are something that just about everyone can affirm. The political promise of the practice of the virtues is accordingly found in its potential to provide a common moral language and a national standard of civic virtue for American society as a whole.

The final chapter returns to the subject of cultural evolution to consider it in light of the controversial concept of progress. Although the idea of the overall progress of human civilization has been largely rejected within progressive culture, the new American Dream argued for in chapter 7 cannot do without an accompanying vision of overall social progress. In response to this need, the chapter articulates an enlarged ideal of inclusive social betterment that can inspire a significant number of postmodern progressives while continuing to appeal to modernists and traditionalists.

After discussing contemporary critiques and objections to the idea of progress, chapter 7 describes how the ideals of social improvement held by each major worldview ultimately tap into the spiritual energy of transcendence in their own unique way. Chapter 7 then explains how these divergent ideals of progress can be aligned within the overall trajectory of humanity’s ongoing historical development. By providing an enlarged perspective that is “outside and above” all three worldviews, Developmental Politics’ expanded view of progress can accordingly foster sympathy for the distinct ideals of authentic transcendence that each set of values is contributing to America’s larger cultural ecosystem.

The chapter concludes by considering the idea that our near-term political and social progress is ultimately connected to the long-term cosmic progress of evolution overall. 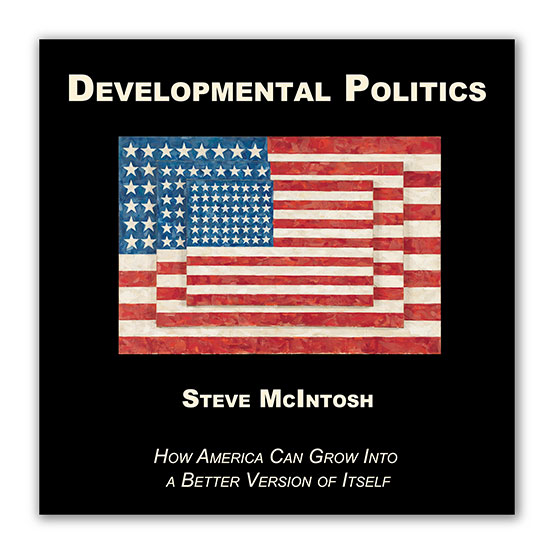